October Commander Card(s) of the Month!

Commander Card(s) of the Month: Battle for Zendikar
by Jim

Here at CCotM I am going to look at things a little differently. This month Battle for Zendikar come out and its time to look at what I think will be the most impactful cards from the new set. I am going to lay out my top 5 picks and the Commander they will best help in the long run. This is purely opinionated and fun. Time to dive in.

5. Scour from Existence, Instant. Best Commander: any Non-Green, Non-White legendary creatures.
This cards is the pure catch all to getting rid of anything in the format and permanently’. It especially shines with Red/Black/Blue only shells where a dearth of enchantment removal exists. Blue had ways to temporarily deal with enchantments but pure Red/Black enthusiasts had to rely mostly on Nevinyrral’s Disk and Oblivion Stone to combat the pesky permanent. Those 2 deal with most of the other permanents, also. Now with Scour, plus Karn Liberated and Spine of Ish-Tah from Scars block, you have multiple ways to deal with enchantments that does not blow up all your other stuff in the process. 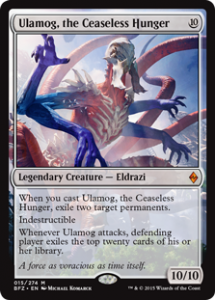 4. Ulamog, the Ceaseless Hunger, Legendary Creature-Eldrazi. Best Commander: Oona, Queen of the Fae, Shadowmoor.
Ulamog is going to see a lot of play in multiple different decks, and will probably work along side Scour from above to take care of a lot of pesky permanents. The second ability though is the one players are going to want to win with, and what is better tag team than Oona to exile opponents libraries from existence. To be fair, and don’t say I didn’t warn you, this is not going to be popular with your opponents, so get ready to beef up the fairies made with Oona, and grab the right permanent with Ulamog’s descent onto the board. 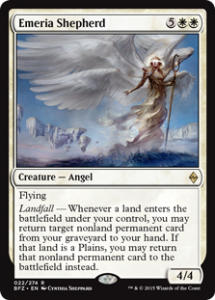 3. Emeria Shepherd, Creature-Angel. Best Commander: Karador, Ghost Chieftain, Legendary Creature-Centaur Spirit, Commander 2011.
The only thing here you need to do is protect your graveyard, at all costs, and if you do that, your creatures will have nine lives. With green’s capabilities to generate multiple land drops a turn, you could be swinging the turn after all your creatures were killed. It will be hard to keep your important creatures off the board. 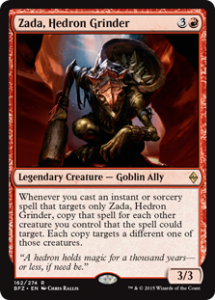 2. Zada, Hedron Grinder, Legendary Creature-Goblin Ally. Best Commander: Wort, the Raidmother, Legendary Creature-Goblin Shaman.
How about making all your creatures better for combat, then we copy it, so they get even better? With Zada, we are targetting all of our creature at the same time, then Wort copies the spell. You want to draw cards for every creature that you have, twice? Or pump every creature, twice? Yep, goblin-like insanity ensues. 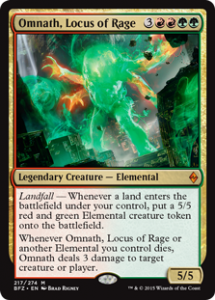 1. Omnath, Locus of Rage, Legendary Creature-Elemental. Best Commander: Itself!
I am thinking with Green’s ability to put a lot of lands in play, combined with Red’s abilities of haste and ways to do damage with creatures independent of attacking, this little guy is going to win out of nowhere. Second, if you drop a boat load creatures with Omnath’s ability and then someone destroys all creatures, they are toast. This is one of the most impactful Commanders I have seen.