MTG: Elven forces for your deck! 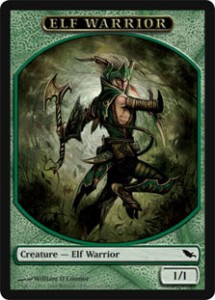 With the release of Magic: Origins, we have seen a large influx in new elves. Elves are my single favorite creature type, not only for the fantasy nostalgia; I enjoy elves because they are so synergistic. They feed off of one another to make each other more powerful and more functional the later the game goes, while at the same time they cost so little to put out that a few losses aren’t usually fatal. We saw 14 elves released, with 9 of them being brand new. Let’s take a look at them.

First up, we have Deadbridge Shaman. At 3/1 for 2B, this isn’t super impressive to begin with. The ability makes it only marginally better: When Deadbridge Shaman dies, target opponent discards a card.” Relatively underwhelming for what most elf decks want to do. I’ll give it a 4/10.

Next is Dwynen, Gilt-Leaf Daen. This card got me excited when it was spoiled, and it is a definite include in my Elf Tribal EDH deck. Coming in at 3/4 for 2GG, she isn’t a power house, but this is where the synergy comes in. She has Reach, allowing her to deal with fliers, one of greens biggest weaknesses, and she gives your other elves +1/+1 while she is on the board. Her third effect is more impactful in limited than constructed, but it can still swing games. It reads: “Whenever Dwynen, Gilt-Leaf Daen attacks, you gain 1 life for each attacking Elf you control.” I give Dwynen an 8/10.

There is another synergy example with Dwynen’s Elite. ”When Dwynen’s Elite enters the battlefield, if you control another Elf, put a 1/1 green Elf Warrior creature token onto the battlefield.” Coming in at 2/2 for 1G, we have a bear in addition to an Elf Warrior token if you already have an Elvish Mystic. That is 3 power for 2 mana, the epitome of efficiency. 9/10 for sure.

This next card has me torn. Gilt-Leafer Winnower is a decent card on principal, but I feel it falls short in a number of areas. Coming in as a 4/3 for 3BB, it doesn’t impress there. The next piece is the effect. Our new keyword “Menace” is an old effect in a new wrapper. It says “This creature can’t be blocked except by two or more creatures.” It is a minor evasion ability on an over costed body. The second effect looks good on paper, but doesn’t perform well in practice. “When Gilt-Leaf Winnower enters the battlefield, you may destroy target non-Elf creature whose power and toughness aren’t equal.” One qualifier, like on Doom Blade is fine. This one has two. It is useless in a mirror, and cannot hit some of the most dangerous creatures, as many creatures’ power and toughness are equal. Overall, I’d say this rare is only a 6/10.

Gnarlroot Trapper is a 1/1 for B that acts as a mana accelerator, albeit at a cost. It reads: “Tap, Pay 1 life: Add G to your mana pool. Spend this mana only to cast an Elf creature spell.” This is fantastic in the early game. While not as solid as Elvish Mystic, it acts as a secondary accelerator, something a solid elf deck definitely needs. The best part is that it continues to function into the late game, when you don’t necessarily need more mana. “Tap: Target attacking Elf you control gains deathtouch until end of turn.” That is an amazingly versatile ability. It allows you to respond to unfavorable blocks, as well as turn your big guy into something that your opponent would rather not block. Overall, Gnarlroot Trapper gets a 7/10.

There isn’t much to say about Leaf-Gilder. It is another mana accelerator coming in at 2/1 for 1G. A solid second turn play in most games, and a bigger threat in the long haul. 6/10.

Nissa Vastwood Seer disappoints me. In the beginning, she was an extremely racist elf, whose sole aim was to protect her people. (This puts her firmly in my favorite color combination of WBG, or Abzan.) There has since been a revisioning of her, making her care about elementals instead. This new position is not conducive to elf strategy, and isn’t one I cared to see. This is the new Dual Faced planeswalker for green. She reads: “When Nissa, Vastwood Seer enters the battlefield, you may search your library for a basic Forest card, reveal it, put it into your hand, then shuffle your library.” So she tutors a land. Not a bad effect, even though on turn three you would usually rather be sticking it into play, or grabbing something like an Overgrown Tomb in modern. This is a solid effect in standard. Next: “Whenever a land enters the battlefield under your control, if you control seven or more lands, exile Nissa, then return her to the battlefield transformed under her owner’s control.” This is her flip condition. So, now we have to look at her planeswalker side. 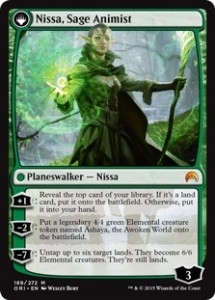 Nissa, Sage Animist
Loyalty: 3
+1: “Reveal the top card of your library. If it’s a land card, put it onto the battlefield. Otherwise, put it into your hand.” This ability is fantastic. It is card draw in green, combined with further ramp. Expect the green player to get out of hand around turn 6 with this ability active.
-2: “Put a legendary 4/4 green Elemental creature token named Ashaya, the Awoken World onto the battlefield.” This is not my cup of tea. If you are as desperate for a blocker as to use this ability immediately, things aren’t looking good for you anyway. It should honestly make elves.
−7: “Untap up to six target lands. They become 6/6 Elemental creatures. They’re still lands.” This ability is extremely weak. Exposing your land base to creature destruction has never really been a strong ability in green. People like to say “Well, you can just use it as a finisher.” Yeah, you can also use Lightning Bolt as a finisher, and Lightning Bolt has never been able to completely shut you down after a poor play or a fog. While Wrath of God style effects have been getting rarer and more expensive, at this point in the game, you aren’t talking about standard. We are firmly into EDH territory, and you just lost if you do this. Someone will wrath the board. You will lose your entire land base for this ability, and so it isn’t worth it. Land animation is not a good ability.

Overall, I feel this Nissa is only a 5/10. She is a strong turn three play in Standard, but you’d almost always rather be playing something like Shaman of the Pack on that turn anyway. If you are playing a landfall deck, (with Battle for Zendikar coming in October, this is a distinct possibility) you have a little more justification to use her.
Oh, hey, did somebody say Shaman of the Pack? Let’s take a look, shall we? “When Shaman of the Pack enters the battlefield, target opponent loses life equal to the number of Elves you control.” Yup direct life loss in proportion to the number of elves you control. I have already put games away in modern with this ability. It is fantastic. Collected Company into this and Dwynen’s Elite is an automatic three life, before combat. Coming in at a 3/2 for 1BG, we are looking at probably the best elf in the set. It balances elven synergy, a strong body, and an efficient cost into one solid card. 10/10

Finally, we have Thornbow Archer, a 1/2 for B. So, better than a 1/1 on turn one, it also has the ability of: “Whenever Thornbow Archer attacks, each opponent who doesn’t control an Elf loses 1 life.” Attacking with it is an automatic, unpreventable loss of life, and that is before it deals damage. 9/10, no problems.
While highly subjective, I hope this helps you make a more solid elf deck. Come in on Friday Nights to play some magic! We draft at 6:45 with commander games whenever there are people to play, and we will do standard or modern if we get 8 people.